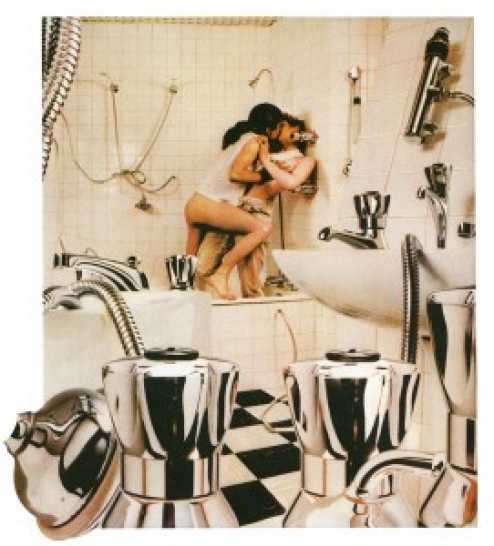 Including the base print, this is a twelve print montage. The base print of the couple in the bath and the black and white floor was mounted onto double weight mount board using Columbia Cement. The floor had to be extended by a couple of tiles. I used a mixture of Photo Dye , Watercolour and Gouache after masking the separate areas in perspective.

All the prints to be montaged were cut out using a razor blade, and by half cutting through the print you could peel the back away, sand the edge and put paint on the actual thin edge to match the tone it was being stuck onto. An accurate trace was made of the positions of the elements.The chrome hose in the top left corner was cut out and the edge had a dark grey applied to match the dark reflection on the hose. Held in position by masking tape to the left, Columbia Cement applied to the back of the hose and the area on the base print, dried and then stuck. Clean off excess Cement.

The print on the right side which is the basin and tiled splash back was then glued in position.

The two taps on top of the basin were stuck in position. On the left side, the Bidet, taps and small chrome hose is one print which was stuck in position. The chrome hose coming forward is stuck in position and a slight shadow airbrushed with Photo dye onto the bidet. The shower head is now stuck down and the large foreground tap is laid over without any Cement and held in position with masking tape at the bottom. With a razor blade the shower head is cut to the shape of the forward tap where it overlaps, the tap print is flapped back and the piece of shower print under the tap is carefully removed as well as any residue Cement.