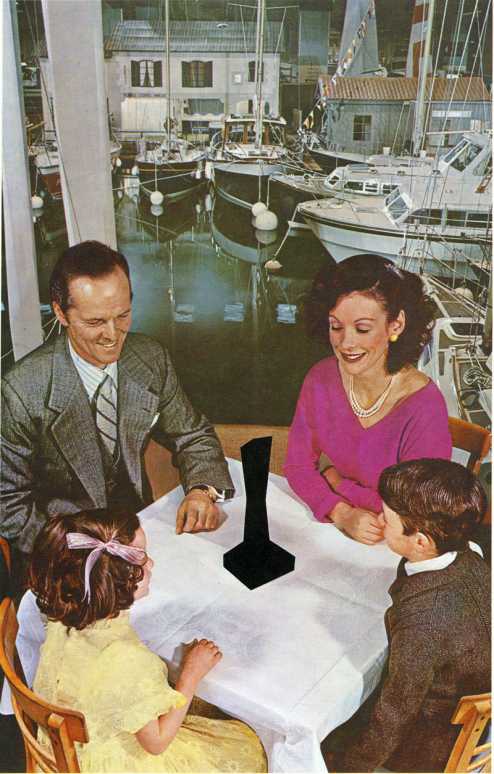 Dye Transfer print of the Front Cover. Hipgnosis had the black thing made and when the Album was released a lot of speculation about what it was, filled a lot of debate and column space in The Melody Maker and The New Musical Express. Storms take on it," it was whatever you wanted it to be, but primarily it could be an energy force". It cast no shadows, reflected no light and absorbed whatever was around it.

Anyway, enough of that. The shot was a two part strip in. The background taken at The Boat Show Earls Court, and the family in the studio. The model is actually on the table, and cast a number of shadows that had to be removed. I masked off the thing and the family and table edge. I soft bleached the dark areas to lighten the table cloth and then with the Sable brush carefully drew back the subtle pattern. The Dad had quite a receding hairline so added some hair and reduced some highlights on his suit jacket. The outer edge of the hair on the adults needed softening with the sable brush and photo dye. In the foreground of the water, between Mum and Dad, was an inflatable dinghy that had to go. I masked the area and bleached it almost to white and then with the large Sable brush, slowly built up the colour with Photo Dye. Once I was satisfied the colour matched, with a smaller brush I drew the mast reflections in the water using a weak solution of Photoflo. This had the effect of lightening the water sufficiently to appear as a reflection.The boats had information and price boards on the decks. All had to be removed by a combination of bleaching and redrawing the background.

The eight inner sleeve images are library shots and were colour prints, not Dye Transfers, to save on cost. These prints were not given to being bleached as accurately as Dyes. The first image with the two chaps, in what looks like a Draftsman Design room, just needed the Black thing drawing in. Trace its position, mask it, wash in black dye. Done. The next one, again mask it , wash in black dye. The eyes of the chap were altered to look at the object. I must admit I was never happy with these eyes. Luckily Storm thought they were ok and the girl was looking in that direction anyway.

The bank vault at Fort Knox was more complicated. The trolley had a load of gold bars on that came up to just below the jacket of the man standing in front of the opening. Transpaseal was laid over the picture then I cut along the front edge of the trolley up the right side of the door, across the top and down to the light grey area, along the top of that to the half open door, down to the lower stripe on the door, then along the bottom of the man's jacket, down the back edge of the trousers and back to where I started.I bleached back to almost white and then removed the mask film. A new piece of film was used for each section to be redrawn using the large Sable brush and photo dye to wash in the appropriate colour. Plus the black object.

The picture of the four young people was easy as the chap was handing a glass to the girl. It was almost a perfect fit for the Life Force with just a bit of redrawing his shirt above her hand. Mask the shape and wash in black dye. The doctor in the next image was holding a stethoscope which encroached onto the chest of the baby. A bit of paint was used to remove it and some slight redrawing of the finger of the baby, and then a slight spray of Gum Arabic.The Life Force was traced in position and black dye washed in once masked.

In the golfing shot, the chap is reaching for the ball which I retouched out with a mixture of photo dye and paint. To me the result is not good as the printing has picked up the retouching. A piece of work that looked good to the naked eye would sometimes show up badly on the printed article. But then, because they are not Dye Transfers, paint was often used with not always satisfactory results. Anyway the Life Force looks ok. Finally the mountain shot. If my memory serves me right I'm sure there was an Oxo tin on the stool. Now this may be a figment of my imagination but it seems obscure enough to be true. However, whatever it was I removed and drew in the Life Force, and retouched the snow on the ground above the shadow of the seat. Because, as we know, the Life Force casts no shadows.