Genesis Lamb Lies Down On Broadway 1974 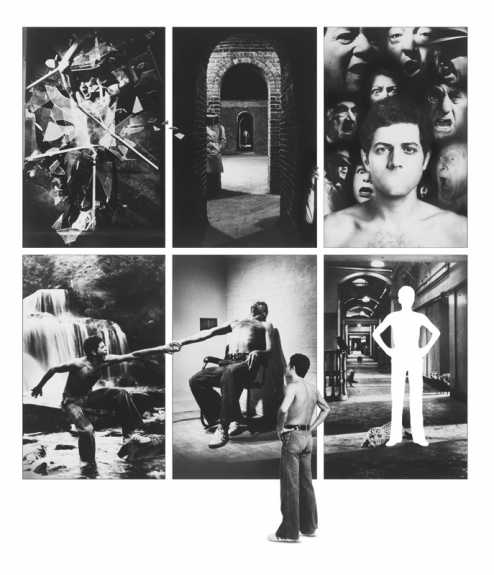 I dry mounted a piece of double weight photographic paper 20x30 inches and made a positional trace and taped it onto the photographic paper. Put that to one side and then worked on each print before mounting them onto the large print. I drew two or three extra pieces of glass in the scene as well as removing the string that was holding some pieces of broken glass positioned prior to the shot being taken. The next shot in the cloisters I shall come to later. In the next shot the faces in the background were all cut out and the edges sanded down to just the emulsion and the edges darkened with Winsor and Newton Lamp Black. They were mounted onto black, single weight photographic paper and a light spray of Lamp black over to knock them back.

The main picture of Rael was a separate print. I bleached the darker parts of his mouth almost to white and then with a Sable brush retouched in the tone and print grain to match the rest of his face with Photo dye. I then mounted this pic onto the heads montage. The shot of Rael in the water I worked on once mounted in position. In the fifth shot I bleached to white the back of his head and redrew the wall to give the appearance his head was sinking into the wall. The sixth shot I traced Abdul in position,placed some transpaseal over and cut the shape with a scalpel. Removed the film shape and bleached it to white.

Each print was cut slightly bigger than finished size. If the prints were cut to size then positioned you ran the risk they may not be square. So using the Columbia Cement, the prints were mounted in position, and the excess cement cleaned off. The trace was laid over the six prints and the overall rectangular trim was 24x6 inches. The trace lines overrun the corners of the rectangle as do the lines separating each print. With the point of a pair of dividers I pricked through the trace and into the print a quarter of an inch over the actual trim size and the dividing space between the six prints. The trace is now flapped back and I am able to place the board under the parallel motion and tape the board in position. With a set square against the parallel rule and starting from the left I can line it up with the first prick mark. Cut the print of Rael jumping through the glass along the edge of the set square. Repeat this process for all the images, carefully cutting round the joined hands. Cut the parallels top and bottom of the six prints and remove the excess, and clean away the last bits of Columbia Cement. Some pieces of glass can now be drawn between the first two shots and two pieces onto the second shot.

The arm and hand of the man in the bottom left of the third shot is montaged onto the second shot, so as to appear he is holding onto the space between the two pics. The hand of the fifth shot can now be montaged onto the sixth shot. Finally the three quarter view of Rael is cut out and the edges sanded very thin and mounted in position. This artwork was copied and supplied to me and I mounted this flat print onto double weight mounting board. I laid a piece of transpaseal over the whole image and masked all the images. With a weak solution of bleach I removed any hint of tone from the background that was picked up in the copying. I airbruhed a soft shadow to the feet of the three quarter Rael. Any montage lines that may have picked up in the copying were retouched out with photo dye and the Sable brush.