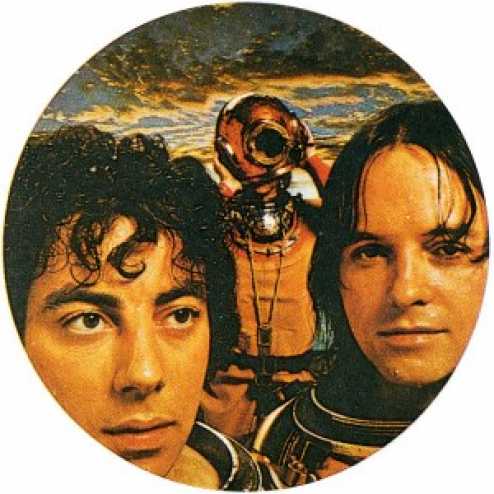 Every image was made up of more than one original shot. The image of Eric Stewart and Graham Gouldman was a four part strip-in, which consisted of the two band members, the diver and the sky. This was stripped together at the dye makers so that I had a flat print to work on, as against a print montage. The almost triangular space on the right hand side behind the diver's raised arm was a light grey. I masked this off with transpaseal and bleached it to white and redrew the sky with a Sable brush and Photo dyes. The gap between the base of Eric Stewart's hair and the tummy of the diver was grey. This was masked with transpaseal and lightened almost to white, and redrawn with Photo dye, keeping the hair soft after putting in the background colour. The hair of the band members was hard edged and with the Sable brush and mainly Johnsons black dye I was able to redraw a soft edge to both heads.

The image of the jetty and the diver holding the girl was a four part strip-in consisting of, 1 the diver and girl, 2 the jetty and two divers, 3 the sea and 4 the sky. The combined weight of the diving suit and the girl, proved too heavy for the person in the suit to stay in position long enough to take the required shots. A 2x2" frame was made to support the arms of the diver. Consequently this had to be removed in the retouching. The areas beneath the arms down to the jetty printed grey. I masked them with transpaseal and bleached back to white and then with a Sable brush and Photo dye washed in the sea colour. The girl's hair was hard edged, so photo dye with the Sable brush was applied to soften the edge. In fact the whole edge needed looking at as it was very sharp. The two divers and the jetty needed softening with Photo dye and the Sable brush. Also the horizon line needed softening as the join was very sharp.

The image of the diver holding the girl against the dramatic sky background was a poster. The areas beneath his arms were masked with transpaseal. The right side was bleached to white and the background drawn in with Photo dye and a Sable brush. The left side, the frame was bleached to white and the background softened down. A Sable brush and Photo dye was used to match the background colour of the sky. The girl's hair needed softening with the Sable brush. and the complete outer edge of the diver and the girl was also blended and softened. A blemish on the girl's thigh was lightened with a weak solution of Potassium Permanganate applied to the area with a small sable brush, and then neutralized with Sodium Metabisulphate. The appropriate colour dye was used to blend this area with the surrounding skin colour.

I have mentioned all the images and the poster which could be viewed on the 10cc website, if you do not have access to the album sleeve.