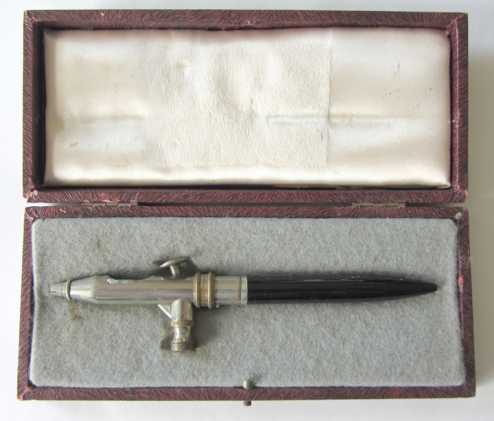 I first used an airbrush in 1964 as a 17 year old apprentice at Chamberlain Art Studios, 146 Holborn, London EC1, which is no longer there. The studio manager entrusted it to me with the dire warning not to damage it. As if! I was so pleased and proud to be given the use of this very refined piece of equipment, that I practiced and practiced at every opportunity when I was not out delivering or picking up artwork as the first year apprentice. Learning the control of the trigger pressure to spray when and where took a while. Early exercises learning how light and shade is portrayed on a box, a tube or sphere albeit chrome, wood, lead, plastic, glass was good fun. Simple airbrush illustrations were attempted and achieved with varying degrees of success. Once I stopped as a messenger I started doing actual jobs that earned the studio money. Like a lot of things in life, but more especially in the world of art, the limit of what's achievable is entirely up to the talent and hard work of the individual. I was lucky to achieve a lot with the airbrush, and there are a large number of airbrush illustrators around doing fantastic artwork, and therefore I would not presume to tell anybody what to do or what not to do with regard to airbrush techniques because there are many websites devoted to the use of the airbrush.

The Super 63 was an easy to use and very reliable progression from the early airbrushes which by comparison seemed rather cumbersome.  I bought an early airbrush in an antique shop in Kelvedon Essex in, I think, 2007. I have never used it but have dismantled it, I don't think subtlety could be used to describe it. With all the workings on show on the older tool, the Super 63 was slimmer and almost like a fat fountain pen to use.

It was not necessary to use the airbrush on all the sleeve artwork but some memorable ones were Montrose 'Jump On It', Pretty Things 'Silk Torpedo", and 'Savage Eye', Black Sabbath 'Technical Ecstacy', and the airbrushing is described on the appropriate pages.

The illustration of the girl in the Airbrush Illustration collection(on the website) was airbrushed with watercolour paints onto a light yellow ochre rough card, and I used a small paintbrush for some white highlights on her lips, everything else was achieved with the Super 63 and an old 'a' model airbrush that was able to spray one dot at a time. A loose mask cut from clear acetate was used for the red dress.

Photographic paper was used for the lightbulbs. The bulb shape was masked off and the shadows airbrushed freehand. With the mask removed, the detail of the filament was drawn in with a Sable, Winsor and Newton brush, also the screw-in base was drawn in and gentle airbrushing used to minimize the brush strokes. (Also described in the Airbrush Illustration collection). For more descriptions of varying illustrations look to the Airbrush illustrations section on the site.


Working on Ilford double weight glossy unglazed prints from the seventies onwards was a pleasure. The paper was robust enough to be worked on in a variety of ways. The print was first mounted onto double weight mounting board either by dry m [...]
View full article


I first used an airbrush in 1964 as a 17 year old apprentice at Chamberlain Art Studios, 146 Holborn, London EC1, which is no longer there. The studio manager entrusted it to me with the dire warning not to damage it. As if! I was so pleased and p [...]
View full article