After a successful career as a London-based illustrator and photo retoucher with a client list including some of the most widely regarded creative teams working at the time, Richard stopped working in London and concentrated on producing a series of limited and open edition print collections based around his own photography. In 1973 he met Storm Thorgerson of Hipgnosis, and for the next 23 years Richard was their prime retoucher on the majority of album sleeves designed by Hipgnosis. Sleeves worked on, among many others, were Pink Floyd "Wish You Were Here", Pretty Things "Silk Torpedo" and "Savage Eye", Led Zeppelin "Presence" and "In Through The Out Door" Paul McCartney illustration "Wings Over America", plus a number of other McCartney albums, Black Sabbath "Technical Ecstacy", Genesis, Peter Gabrial, 10cc, Wishbone Ash. He also illustrated numerous books for the publisher Dorling & Kindersley and his illustrations and artwork has appeared in books by Hipgnosis, Pink Floyd and books on the art of Airbrush illustration.

The Print collections are loosely themed, drawing on inspirations as diverse as the wide, open landscapes of his native Essex countryside and the intriguing details located wihin it, collections of antique glassware, the quiet, graceful villages in idyllic French backwaters.

The prints have been bought by a wide range of collectors, from small independant galleries to large distributors, throughout Europe and America.

The Limited Edition Photographic images are shot with a 30 year old Pentax MX, onto transparency film and scanned and worked on.

The Retouched images Collection are a combination of scanned images and images shot on a Pentax Digital SLR camera.

From 2006 Richard turned his attention to Oil Painting. He had completed a few paintings in the past but now he had the time and space to devote his energy to oils. Old holland oils were suggested by a friend. A good suggestion. A wonderful depth and purity of colour. Having spent most of his life retouching photographs and producing Airbrush Illustrations to a fine degree and using a fine Sable brush, the challenge was to use larger brushes and a pallette knife to try to get away from fine detail in his paintings. Up until 2014 large smooth canvasses were used. From 2015 smaller paintings on cotton flax have been produced. In 2017 after a stay in hospital, Richard changed to producing a series of abstract Oil Paintings on board and smoother canvas  which resulted in his latest more image based work being much freer.  Limited Edition Prints of all the paintings are available.

The limited edition prints are all editions of 200, printed onto FibaPrint White Semi-Matte 300gsm paper, using lightfast inks, individually signed and numbered. From 2018 the Editions are between 100 and 150. They are issued with a certificate of authenticity, signed and dated.
They are guaranteed for a minimum of 50 years under normal conditions, e.g. in dry areas and not in direct sunlight or bright light 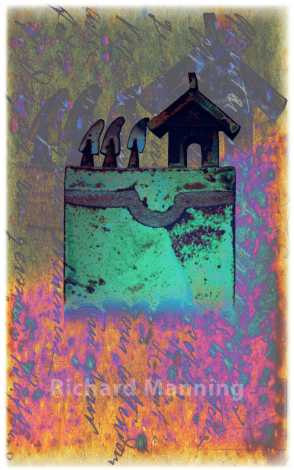